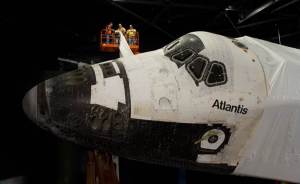 NASA’s Kennedy Space Center Visitor Complex today began the two-day process of unwrapping the Atlantis orbiter from the protective shrink wrap that has encased the priceless artifact during construction of the $100 million Space Shuttle Atlantis attraction, set to open June 29.

Atlantis has been enclosed in 16,000 square feet of protective plastic shrink wrap since its Nov. 2 move from Kennedy Space Center to the Visitor Complex and into the 90,000-square-foot attraction, which has been under construction for 15 months.

In a planned approach today, specialists first cut the shrink wrap into sections and then lifted it away in a dramatic reveal of much of Atlantis, including the forward fuselage. The unwrapping process is expected to be completed on Friday.

Atlantis is raised 30 feet off the ground and rotated at a 43.21 angle as if orbiting Earth. When the attraction opens June 29, guests will have an up-close, 360-degree view of Atlantis from several different levels — the wear and tear of its 33 missions apparent on its protective external tiles.

Next week, Atlantis will be inspected and prepared for display as the final phase of work on the attraction continues. Beginning in May, the orbiter’s payload bay doors will be opened, a meticulous three-week process, allowing guests to see inside the space shuttle’s payload bay as never before.

Meanwhile, assembly continues — with the aid of a 240-foot-tall crane — on two full-size, high-fidelity solid rocket boosters (SRBs), which, when vertically mated with a high-fidelity model of the external tank (ET), will form a dramatic, 184-foot-tall gateway under which visitors will pass to enter the Space Shuttle Atlantis attraction.

Space Shuttle Atlantis will tell the incredible story of NASA’s 30-year Space Shuttle Program through a host of multimedia presentations and more than 60 interactive exhibits and high-tech simulators that will bring to life the complex components and systems behind this incredible feat of engineering. One of the most complicated and sophisticated pieces of equipment ever built, the shuttle was a vehicle that launched like a rocket, flew in orbit like a spacecraft and landed on a runway like a glider. The immersive experience also will shine a spotlight on the astounding achievements made over the course of the 30-year Space Shuttle Program, most notably the building of the International Space Station and the launch and maintenance of the Hubble Space Telescope